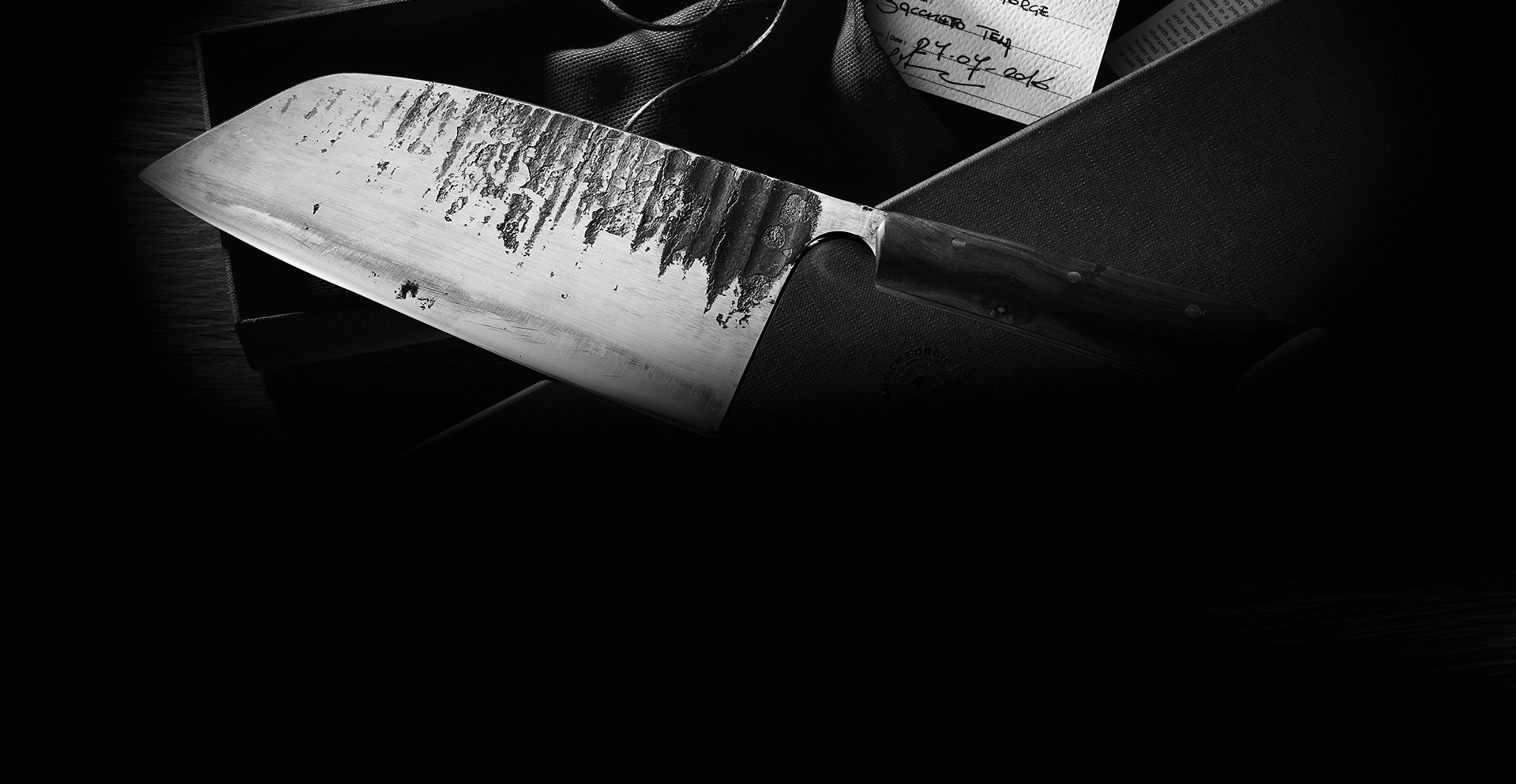 here are the knives made in collaboration with chef pier giorgio parini… when i met him for the first time at pier giorgio’s “osteria del povero diavolo “, i saw him working, and i held in my hand some handcrafted japanese knives that cannot be found in italy and which have nothing to do with the industrial production that is offered to us….

series “0” was born from there, in fact each knife is numbered and accompanied by a certificate.
series “0” and series “1”, have been working in pier giorgio’s hands since 2015 with my satisfaction.

this result was my first great satisfaction, the one that i will never forget: “i conquered the kitchen of the” master of the express cuisine “, and my blades started making daily chef’s cuts….” everything i forge is made of carbon steel, if after being washed my knives are not oiled, they make rust, the best steel cutting knife makes rust, it does not tolerate careless. the steel hardness is a good compromise for the use in the kitchen, the blades do not beat unnecessarily 63 hrc as if they were punches or shearing blades to cut steel.

as in pier giorgio’s “surprise” kitchen, we decided to make the handles grip with the types of wood that i can personally find in my woods: dogwood smoke tree from carso, laburnum, hawthorn, juniper, mespilus, spin cervino etc., ” alien species are forbidden “… according to pier giorgio ‘interpretation, brute de forge, dear to me for the story it tells, has an important meaning: the burned waste is the common symbol of the kitchen and the forge: “the fire”

sharpened on both sides pier giorgio’s bursar, the ” master chef” in the use of herbs…

fillet is his task the forged blade with the old heavy hammer has a thickness between 2.0 mm and 1.0 mm, great penetration to prepare every day a lot of kilograms of anchovies and minnows fillets.

blade sharpened on both sides

slicing … similar to a ham knife, can be used as such, or to thin slices the vegetables and llet. i’ve learned with pier giorgio, that a blade to make precise cuts must be thin and narrow and not too long, and above all not to be exible, sharp steel must transmit to a sensitive hand the feeling of precise cut, be the hand extension

this one, for the chef technical opinion is a revolutionary knife, it enclose the features of the half shot and of a normal knife. varying the grip position on the handle it can be used as a small cleaver for bones and cartilage or take the advantage for cutting and slicing, of the last 7-8 cm knife blade .