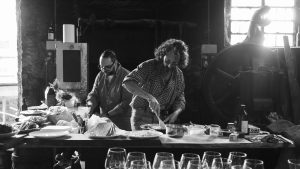 who knows how his surname is pronounced in france and japan, where simone cantafio (ò?) has already demonstrated his great talent as a chef only at the age of thirty. in france he was hired by michel and sébastien bras, who then catapulted him to the land of the rising sun and put him at the helm of a restaurant (two michelin stars) with a japanese-only brigade, on the island of hokkaido in toya. and simone is preparing to return to japan to run the new bras karuizawa. probably in january 2021, after the annus horribilis marked by covid. yet the chef did manage to turn 2020 into an annus mirabilis anyway. and how? returning to his homeland, calabria, where his cuisine seems to have found new life and inspiration. follow him on instagram! because his true vocation consists precisely in nourishing his culinary imagination with the true and genuine products of his territory, whether he is in france, japan or magna graecia. but with one more step, that is the art of creating a transversal yet highly personal cuisine.

therefore, we must absolutely not consider simone cantafio a brain on the run, we see him rather as an explorer, a kind of gastronomic anthropologist. just put him to the test. as did michele massaro, the so-called chefs’ cutler. michele is a cutler from the friuli’s town of maniago, but it would be simplistic to consider him only as such. however, we must say that the fire between simone and michele was lit thanks to a knife. a splendid knife forged by massaro in agreement with cantafio, who made a singular request: “i want a branch of gravner ribolla gialla vine for the handle”.

no small thing! then, at the end of the work, the friulano and the calabrese celebrated the accomplished feat by cooking a lavish and anthropologist-like lunch together. almost a rite, which took place in the “batifer di campagna” (the country forge) around the fire. a lunch obviously accompanied by some good wine. simone brought with him some excellent calabrian products, michele guided him to discover the meat, fish, herbs and fruit of his territory and – why not? – capovilla grappa.